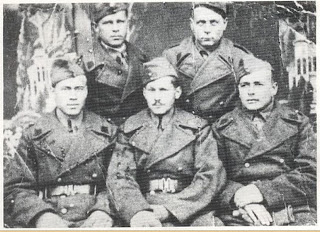 This isn't exactly crafting as yet but I wanted to post the message and photograph so Google will pick it up.
My grandfather bottom left was Polish.
On the right is Tadeuz Wojcik his best friend
His name was Antoni Kazmir Meildun and he was born in 1916 in Vilno.
He was in the Polish army and arrested and deported to Siberia in 1940. He was in 2 different camps in Komi region in 1941, camp no 501  URDOMA and camp 564 MIEZOG. In 1942 he got amnesty and went through The Persian (now Iran) Corridor to Palestine and became part of General Anders army in The 2nd Polish Corps. He fought at the Battle of Monte Cassino in Italy and was awarded a medal. After the war he could not return to his family in Poland as he would have been executed. I am now trying to get all his records from Russia, Poland and the Ministry of Defence.
I will be creating a decorative journal of his life when I receive the documents.
I am also hoping that someone may read this that has knowledge of the POW camps in Siberia, or who also has a father or grandfather who may have served in Anders Army and knew of Antoni.
Thanks also to The Kresy-Siberia yahoo group for all your help.
My grandfather was very clever as he used to make silver rings from teaspoons. He also copied and made military ribbons which he used to sell.
He also spent time with the Zigani Gypsies.

I hope you get lots of information. What a great project you have in store!

Good luck Carol and I hope you get a good result. You work so hard researching your family tree and it's so interesting.
Jo x

Good luck with your search - it must be incredibly difficult finding information from that period so I hope there are people out there who can help. Elizabeth x

What a wonderful project to undertake. Good luck with your further searches. A x 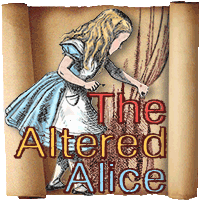 Please ask and do not take

What my name means